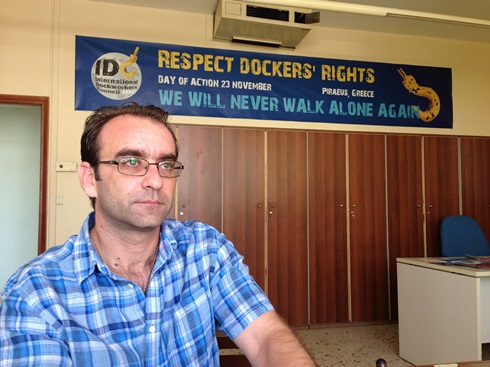 Chinese labour standards in Europe. A daily reality for hundreds of employees, hired by subcontractors/slave traders, forced to work at abysmal security conditions and fired at a moment’s notice, in case they complain about medieval work relations. Dimitris Batsoulis, kicked out for requesting implementation of workplace safety regulations, has now gone to court against his former employer. This is his story

When Cosco came to Greece it did things differently than normal employers. It did not hire full-time workers, it signed no collective agreement, it did not train its personnel, it just started doing business. It works as haphazardly as possible. Now, out of 600-700 employees, around 200-250 are working full time, with contracts privately imposed, not collectively negotiated. Their employer is a Cosco subsidiary called SEP in Greeks or PCT (Piraeus Container Terminal). The rest are hired by a complex web of subcontractors, again with privately “negotiated” contracts, very low paid. The money those people receive each month is fixed in advance (it corresponds to 10, 12, sometimes 16 workdays) irrespective of when they are called to work – nightshift, Sundays, anything goes. The main subcontractor, Diakinisi, has hired 4-5 other smaller subcontractors providing personnel, so that between each employee and the company there are 2 or 3 intermediaries. Out of one man’s wages, 2-3 layers of contractors get their cut. If this is not modern day slavery then I don’t know what it is.

Of course unions and collective bargaining are strictly forbidden. Employees receive no training whatsoever, despite the fact that the law granting Cosco rights to invest at the container terminal obliges the company to train employees.

-Theoretically, trade unions are not banned yet.

–       There are no “unionising forbidden” signs but people who speak up are fired and there is an atmosphere of sheer terror. Workers at the port are afraid, they try to salvage their wages at every cost- and the cost is truly high. If a journalist could get in there as employee for a month, or even a week, you’d understand what I mean. Nightclub style bouncers check workers, chatting amongst employees is not allowed, there are no work regulations.

-The law of the jungle?

Exactly. These are 19th century conditions. In Hong Kong, Hutchinson runs a terminal along the same lines and workers there went on strike for 45 days, and gained solidarity from other port workers around the world. Their conditions were slightly improved, but they still work with this subcontractor web that makes it impossible to find out who actually runs the port and who is responsible for these labour conditions. This is kind of what we see in Piraeus.

–       No, not at all. For 11 years I was running my own earthmoving business, I was doing digging, demolitions and so on. When the economy plummeted, I had to park the machinery and shut down my business. I was unemployed so I started looking for work as a qualified machinery operator -I ‘ve had these qualifications for 17 years now. I found out about a vacancy at Cosco by word of mouth. Then I had an interview with the main Greek subcontractor, Diakinisi.

–       I did not set out with this in mind at all. I just needed work, because unemployment was 25% at the time (now it is higher). So I was forced to sign any work contract put in front of me. In this contract, 3 out of 10 terms were in blatant violation of workers’ rights.

We were made to sign two contracts, one normal full time contract and one saying we will work 16 days a month. They did this so that, if they had to fire us, they’d pay lower severance payment, according to the second contract. I was working very hard, the job was very dangerous and security measures had to be strictly enforced. But every day, we were putting our own lives and our colleagues’ lives in danger. My machine had problems, which I detailed in writing at the end of each shift. The breaks were faulty, the lubrication system was faulty, hydraulics had problems, tires had problems, lights at night had problems. The next day, we’d go back to work and find out nothing had been done about it. Heating and air conditioning at the cabin were broken. When you are doing something this dangerous, you need optimal temperature conditions, so as to work with a clear mind. Before getting to work, we used to talk about these problems, but it was impossible for all 800 of us to go to the management office and discuss these issues. We had to form a committee. Some of us indeed formed a five-member workers committee. As soon as the company found out, we were fired.

–       Yes, although I do not know exact numbers. Two of us then went to court against the sub-subcontractor, claiming we were fired because we tried to form a union. We could not directly sue Cosco or the main subcontractor, Diakinisi. Let me also point out that there was no work schedule, working hours were incredible.

–       We didn’t. We were getting SMS messages saying we need to be at work in three hours. Nobody knew next day’s schedule. For nine months, I was never given a work schedule. There was simply none. We didn’t even dare to go visit our parents. We tried to tell our colleagues that this must change, so that we can organize our lives. There were colleagues whose kids were in hospital and could do nothing about it, out of fear that they would be blacklisted.

–       What did labour inspectors say about this?

–       In the nine months I was working there, I didn’t see an inspector once. They were receiving tips – anonymous tips, because if someone spoke to them openly, they’d be immediately put “on ice”. Some people who alerted work inspectors were not called to work for a week. When we were fired, we went to the local labour inspection office in Keratsini and they could not show us our work schedule, although they were supposed to receive a copy every six months.

–       No. If someone needed to go to the toilet, they were told to do so in the machine cabin. There were bouncer types walking around without any specific job to do and we wondered what they were doing. There was constant terror. We were constantly reminded that if we complain, we’d be the next to go. Unemployment is very high, so nobody said a word.

-Why did you nevertheless decide to speak up?

–       A machinery operator must be able to move in the cabin and see the container behind him. The machine, together with the container weigh 100 tons. This is a very responsible job. The operator should not be made to wear 10 layers of clothing to keep warm. I had to wear three jackets, because there was no heating. In January 31st 2012, I was working without heating at a temperature of -1 degree Celsius. It was snowing in Piraeus. Back in the summer we had already submitted reports saying heating does not work. After working three hours in these conditions, I could not go on. My hands were numb, my feet were numb, my brain did not work properly and I was constantly putting myself and my colleagues in danger. A 100tonne machine moving in the port at 15km per hour is a great danger. The crane can fall on a ship. I said stop, I need to get down, get warm and get back up again. They told me to go home and I heard nothing from them for a week. No SMS no nothing. Psychological warfare. After a week, they called me back, they had me work for 2-3 days and then I was summarily fired, together with others. That s how I was fired. People still working there live this every day. Workers must not think, this is the new model.

–       When Prime Minister Samaras visited Beijing, he triumphantly announced that the Chinese will buy the rest of the port as well. Is this good for the port, for the workers and for the economy?

–       The Chinese captain, captain Fu says Cosco is very beneficial for the local economy. I have not seen conditions in Perama (a very poor area near the port) improve because of Cosco. As for Samaras’ announcements, I think the blame for what s happening in the port does not lay with Cosco or with foreign investments, it lays with oversight mechanisms that are totally broken. Investors want to come in and make as much money as possible, as soon as possible. Labour inspectors (SEPE) must make daily, or at least weekly controls, they must have a constant presence in the port. Instead of this, they never come, or they come by appointment, while COSCO installs a 3 meter high fence and cameras everywhere. I tried to talk with the Secretary General of SEPE but he couldn’t see me, because he was busy running his campaign as a candidate of the socialist party.

–       How about the port as a big employment opportunity?

–       Beforehand, the Piraeus container terminal employed 400-500 people. Now it’s 700. No more than 250-300 new jobs- flexible, badly paid and dangerous. And we are not talking about stable employment. If the three of us split a monthly salary amongst us this is not three jobs, it is one job. This must be clear. Health care and insurance funds also lose out because of Cosco. The company does not pay premiums for unhealthy and dangerous employment, as it would be forced to do. Smaller wages means smaller contributions to health care and pension funds.

No taxpayer should be paid under the table. Everything must be taxed and contributions to social security must be paid. When there is no collective representation, employers give out crumbs. They divide and rule, they create an army of spies. That’s why there must be a collective agreement.

At OLP (the part of the port still run by the Piraeus Port Authority) there is a collective agreement and there is a workplace health service that works because we put pressure for it to work. When it is very hot in the summer, labour regulations are enforced. OLP is forcing us to work under difficult conditions too, the port is a very special place. A ship comes in and it needs to offload in three shifts, the client will always try to make it shorter. But when its 38 or 40 degrees outside, then inside the metal hull of the ship temperatures rise to 45 degrees. So our health service comes in with a thermometer and orders everyone to stop for a few hours. Our employer informs the client that there will be a two-three hour delay. But if there is no collective representation, then the difference is obvious. It’s people versus profits, once again.